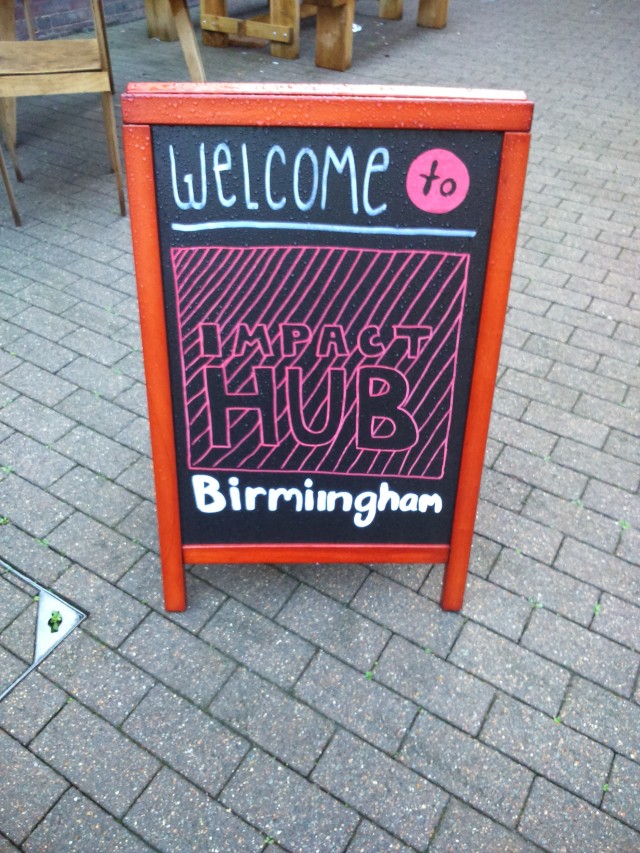 I am interested in the rise of co-working/collaborative spaces in Birmingham over the last few years. I thought it would good to produce a list of these spaces. Here it is.

The Moseley Exchange This was the first co-working space in Birmingham and remains popular. This sprang out of the Moseley Community Development Trust and it hosts regular workshops and other professional and social events of interest to their members

Impact Hub Birmingham  This is a newer kid on the block – but has certainly made its presence felt in the City – it was launched in Digbeth in 2015 – as has quickly attracted members and hosts a whole host of events. Its ethos is one where it is not just about co-working but seeking to use the power of people coming together to start to tackle some societal problems. It is part of a worldwide network of 77 hubs – with 11,000 members

Boxxed  Another Digbeth based co-working space.

Birmingham Open Media This not for profit facility also opened in 2015 and is focussed on collaborative working  in the fields of art technology and science. This like Impact Hub has made a presence in the city running regular events and now hosting an innovative restaurant Nomad

Innovation Birmingham This facility based on Aston Science Park – has a range of space for hire including a hot desking facility – especially for those digitally minded. It importantly is opening a new building in March 2016. This will be called ICentrum and at its heart will be a co-working space – called Serendip – where corss innovation between digital and mainstream sectors will be encouraged.

Bizzinn Part of the University of Birmingham’s Research Park; this facility includes hot desking and a range of other facilities to encourage business start ups and seems to offer free space. Worth checking up on this!

ArtHaus Bizarrely it has taken the Custard Factory/Fazeley Studios a long time to get into the co-working game. This new facility seems like it might be a co-working space focused on the arts and crafts.

The Space It might seem that all co-working is based wither in Digbeth or south Birmingham – but that is not entirely true. This space based in the Jewellery Quarter is an attempt to rebalance the city. I have yet to visit this facility but from its website it looks like a really good option.

Blacktape Studios This space has been suggested as an addition to the list. Hidden away on Chester Street – very close to Innovation Birmingham but on the wrong side of the road – it looks like an innovative equipment sharing/ collaborative facility for the video and photography sectors but it also has a laser cutting/engraving facility. Website could be clearer!

The Transfer South Birmingham however fights back. This facility – based in the Old Printworks – itself an example of a Maker Space and home to the well known Ort Cafe and Gallery – is due to open on March 5th 2016 and is targeting attracting sustainability, arts and community focussed people, groups and entrepreneurs.

So from a standing start two years ago – where there was only one facility the numbers are growing. One further initiative under way – is called Steamhouse – an initiative by Birmingham City University (BCU) and Eastside Projects to support the entrepreneurship of its students. BCU already has the Jewellery Industry Innovation Centre – which at one stage did host incubating companies.  Steamhouse – will focus on the concept of cross innovation – like with Serendip – but with a focus on the creative skills emerging from BCU students and graduates. This initiative has at its core a new facility designed to fuse learning, knowledge, practice and production. A modern co-working – maker space! But this is not the only  such space being planned. Innovation Birmingham I believe is working on plans for a high spec digital ‘Producers Wharf’ where 3D manufacturing using the latest software with the advantage of its high speed connectivity – will allow for rapid prototyping etc.

So Birmingham is buoyant with this new type of working space. This can only be good news for the city. Please let me know – if there are others I have missed.

← How Digital is Birmingham’s Economy
How is our economy changing? →